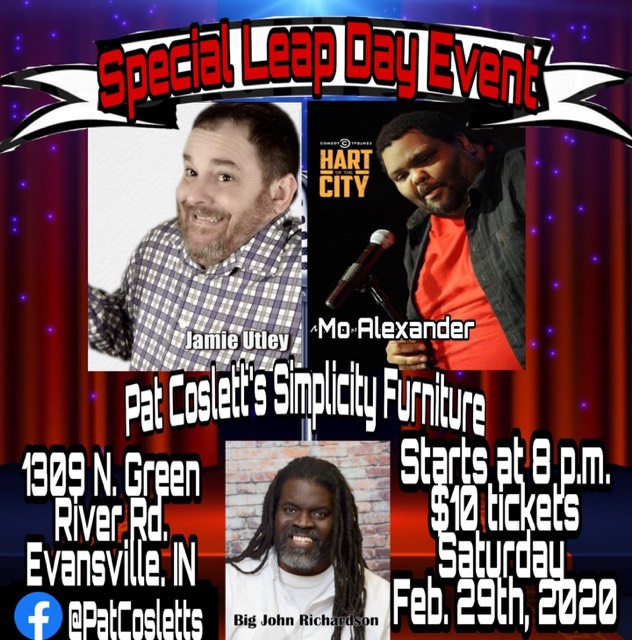 Big John Richardson is making his return to the stage in Evansville headlining the “Special Leap Day” Comedy Show on Saturday, February 29 at 8pm in the O’Grady Entertainment Room at Pat Coslett’s Simplicity! Joining him will be the incredible Mo Alexander and funnyman Jamie Utley!

When Mo Alexander hits the stage, it’s clear that you’re in the hands of a man who knows what he’s doing. With comedy influences such as Bill Hicks, Paul Mooney, and Richard Pryor, Mo combines intelligence and debauchery into a product that is just as funny as it is important. With an ability to access both the smartest and the stupidest parts of your brain, there’s a reason this comedy phenom has been headlining comedy clubs nationwide for over 20 years. Mo began his professional full-time comedy career in July 1996 featuring in clubs throughout the United States and by 1999 he was headlining.

Jamie Utley was born a beautiful, normal, healthy baby…and then things went wrong. Jamie takes the audience on a roller coaster thrill-ride, showing them what the world looks like through his eyes as he guides them along the twists and turns of his experiences with his dysfunctional family, relationships, being a single parent, staying sober in recovery, and male-bonding. Jamie Utley toured on the Monsters of Comedy with Ralphie May and Jim Breuer, starred on Laughs on FOX, and has appeared on The Bob and Tom Show and Fridays with Jim Breuer on SiriusXM Satellite Radio.

Tickets are only $10 at the door and drinks will be available for purchase from Bubbles of the world famous Pub and Carne Asada! We hope to see you then!